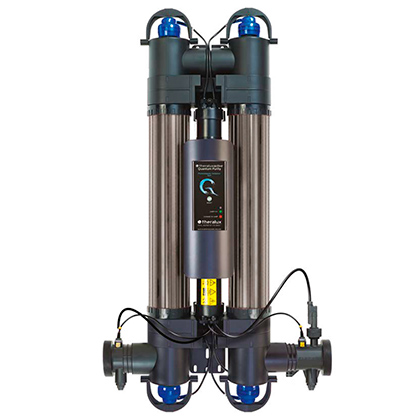 Take pool hygiene and water clarity to the ultimate level. Pool water that sparkles like diamonds in a way you've never seen.

Quantum harnesses a revolutionary leap in technology. Already used and approved by high-profile industries such as hospitals and drinking water purification companies, it has now been adopted by Elecro and brought to you!

Quantum uses new Nano Crystal technology: a prime focus of the science world today; possessing the power to sterilise sewerage into drinking water without the use of chemicals.

In fact, one of the many benefits of the Quantum is a significant reduction of residual chemicals, such as chlorine or hydrogen peroxide.

Built to be installed easily into your existing set-up, the Quantum is completely safe and significantly more powerful than chlorine, hydrogen peroxide, UV or ozone. Photocatalytic Oxidisation has an immensely powerful effect with the ability to instantaneously destroy viruses, bacteria and pathogens, and more astoundingly possessing the ability to convert sun tan oil, urea and other contaminants back in to their harmless molecular form.

Meticulously designed, Elecro have developed the first cost effective, photocatalytic oxidiser specifically for the swimming pool industry, for a toxin free swimming sensation. Not only does it eliminate undesirable side-effects such as sore eyes, itchy dry skin, discoloured hair and strong odours, but it also makes water crystal clear, and most importantly it creates no risk to the lungs or health of bathers and swimming pool attendants.